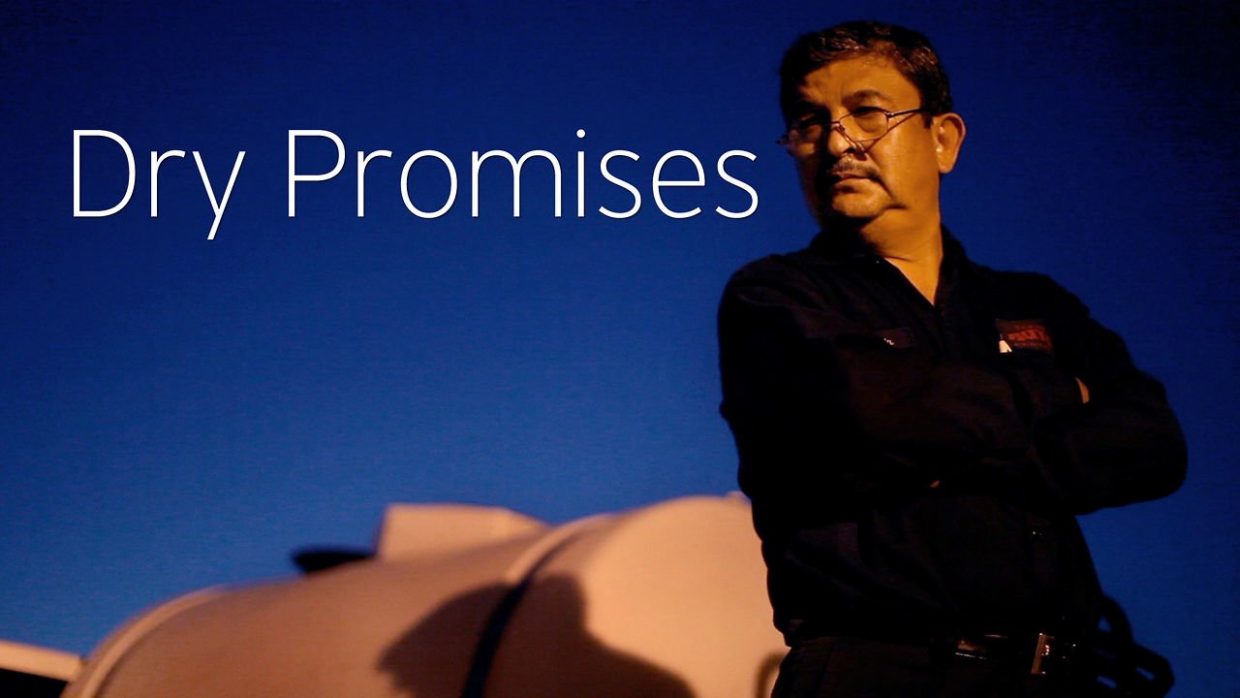 WHAT WE PAY: Dry Promises

Ten miles southeast of Austin, Texas, residents of the Las Lomitas neighborhood have lived without running water for a decade. They are forced to haul water into their homes for simple uses, like washing dishes and flushing toilets. This experience has changed the way they use and value water.

In 2002, the community of Las Lomitas was a dry slope of thistles and sunflowers 10 miles southeast of Austin, Texas.

Ten years later, dozens of houses and trailers dot the little hill, most of the thistles are gone, but it’s still dry as dust. More than 30 families live in the Las Lomitas community. Not one of them has running water—and none of them ever has.

To have water to clean, flush and cook, all the families who live in the community have to haul water. They fill giant water tanks at the Travis County filling station about five miles down the road, and truck them home.

A land developer identified by Las Lomitas residents as Hank Peavler originally acquired the land. The law didn’t require him to run water lines to plots if they were more than 10 acres.

So Peavler sliced the land into sections that were all a little more than 10 acres and put them up for sale.

Despite no water lines, the community grew over the next decade. Some residents, like Ira and Jeanette Parker, moved in assuming the situation was temporary.

Peavler could not be reached for comment. The phone number listed for his development company in Liberty Hill was disconnected, and no other Hank Peavlers are listed in the area.

When water never came and Parker complained to the county, officials told him they couldn’t do anything.

The Parkers have 12 grandchildren, and they like to play in water when they visit. “They come over and turn on the hose,” Jeanette Parker said. “We’ll get up the next day and find our tanks empty.”

Other families bought land and moved into their homes without knowing there was no water available. After new homeowners hooked up to electricity and installed water faucets, showerheads and hoses, the water companies would turn them away.

This predicament forced Las Lomitas residents to be creative with their water use. All over the neighborhood, people set up tanks to collect rainwater and buckets to catch water dripping from air conditioning units.

Time passed, and the community never agreed on a course of action to deal with the situation.

“Now it’s too late to sue,” said Illeana Riojas, a volunteer who is working with the Las Lomitas community.

The lack of running water becomes more than an inconvenience when the Austin area experiences extreme weather. If there’s a fire during a drought and a tank is low, many Las Lomitas houses can be seriously at risk.

Carlos Yescas lives in a trailer on one of the slightly-more-than-10-acre plots with two other families. His uncle lives in the trailer behind his, and they get water together about once a week.

On Saturdays, a long line forms down the road leading to the supply tank. A white hose hangs down in front of a sign that says, “Not Approved for Human Consumption.”

“We’re in America, where water should be a resource that everybody should have,” Yescas said. “We need water; there isn’t a day that goes by when we don’t use it.”

It would cost $500,000 to build a pipeline to the neighborhood and more than $3,000 per family to connect the water meter, Riojas said.

For almost all the residents, this cost is prohibitive. Digging wells is an option, but it’s also expensive, and there’s no guarantee they would hit water.

Las Lomitas families applied for money from the federal Community Development Block Grant Program, but the process can take up to six years.

Frustrated by its situation, the community has started to organize fundraisers, hire lawyers and attract media attention.

Although Yescas and the other residents are fed up with waiting for water, they say they’ve learned something from the experience.

“It’s made us more aware of the worth of the water,” he said. “We know the value of it. We’re always going to remember this experience.”